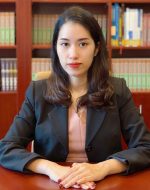 Graduating from the Ho Chi Minh University of Law with a bachelor degree in International Law in 2012, Ms. Tram Chau started working as a Civil Servants at People’s Committee of Ward for one year. After that, she transferred her work, turned into an in-house counsel at Saigontourist Cable Television Co., Ltd (SCTV) – one of the largest companies in Vietnam in designing, installing and maintaining cable television system as well as re-broadcasting Vietnamese programs and foreign channels.

Practicing as an in-house counsel at SCTV for a while, with expecting to become a professional lawyer, Ms. Tram Chau joined Phuoc & Partners in 2016, starting with the job title of Paralegal. At a professional environment as P&P, she was trained by and supported to the qualified lawyers to serve domestic and foreign individual clients as well as local and international companies and corporations, with diverse fields such as Labour, M&A, Real Estate, Debt Recovery.

Currently, she has just returned Phuoc & Partners with the position of Senior Paralegal and be ready to take on all working challenges under this new role, to be able to go further with her lawyer career path.