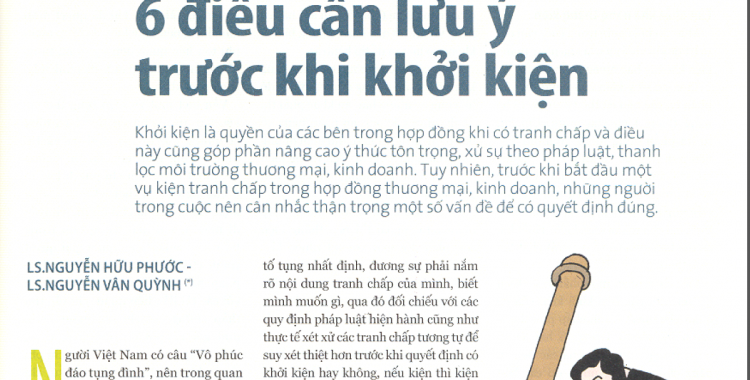 Initiating a legal action is the right of contracting parties where there are disputes, and this also contributes to raise awareness of respect and behaviour in accordance with the law and purify the commercial and business environment. However, before taking a lawsuit regarding commercial and business contracts, the persons involved should consider carefully some issues to make the right decision.

Vietnamese has the proverb “Going to the court is ill-fated”, so in business relations, the parties often try to resolve disputes and disagreements through negotiation and agreement, even ignoring small violations to avoid bad relationship.

However, sometimes the parties cannot even sit down together to talk about the matter of who is right and who is wrong, or beliefs in the promise of implementation of obligations of the partner no longer exists, so the act of suing the other party to the court (or the arbitration) is difficult to avoid. Especially in the difficult financial situation, the contract violations and disputes tend to rise, the patience of the contracting parties reduces making the legal proceedings seems to be more popular.

However, it is a mistake to bring all contract disputes to the judicial bodies for settlement. The initiation of a legal action should be considered as the final measure when there are no more possible solutions. Otherwise, the plaintiff may suffer the double losses for its decision of “filing a lawsuit” when no benefit has been collected from the legal proceedings.

To assist the involved persons in limiting the potential risks, it is necessary for those to consider the following key points before deciding whether to sue or not and how to take the legal proceedings.

The involvement of lawyers in the case

In Vietnam, the engagement of attorney involving in the lawsuits including counselling prior to filing the petition is not as popular as in many countries having developed legal proceedings activities for various reasons, including the doubt of the role of lawyers in the dispute settlement process and costs to be paid to lawyers in the condition of the economic level is still relatively low at present. In some cases, the parties intending to sue did not want to share the information on the dispute, the internal operation or other sensitive information with the outside.

Therefore, it is necessary for the parties intending to sue to clarify its demand and financial capabilities to determine whether their cases require the involvement of lawyers or not. Incorrect or wrong time decision may lead to certain losses. In not a few cases, the plaintiff must pay high costs for litigation lawyers in small disputes with simple facts that the plaintiff itself would be able to fully exercise its the rights at the state bodies conducting proceedings. Conversely, there are also many cases in which the plaintiff files the lawsuits itself, without the advice of lawyers. When the legal documents of the cases are reviewed. the plaintiff is in the weak position on legal grounds, taking with potential waste of all legal costs or arbitration costs, and even be counter-claimed by the defendant.

Consider the possibility of win

A question for the person involved to make before taking legal proceedings is the percentage of ability to win.

Based on the opinion of legal counsel, the concerned parties can consider the irability tow in in the lawsuit themselves. Only when the party is self-confident about itself,it should file the law suit. Conversely, when not carefully consider who is on the right side in the dispute, the submission of the petition will easily lead to damages to the petitioner. Damages may include both physical and mental ones.

The acceptance of a portion or all of the petitioner’s requests of the state bodies conducting proceedings depends on many factors. In which, two important factors are testimony of the parties and evidence submitted by the parties. Along with the preparation of testimony for its benefit, the petitioners should take time and effort to collect as much as possible the records and evidence required to prove that his requests in the lawsuit is founded on facts before conducting the lawsuit. The evidence should be arranged and presented systematically and coherently. Careful preparation for testament and evidence before filing the lawsuit would increase significantly the chances of winning.

Enforcement ability of the losing party

The ultimate desire of any lawsuit is mainly to demand a sum of money or property compensation from the defendant. So, the party intending to conduct the proceedings needs to consider whether the defendant has the ability to enforce the judgment or not. If not, the petitioner’s goal is not reached, but it takes time and money to sue. This is not always possible to perform, but it is the action should not be ignored when one party wants to initiate a lawsuit demanding money or properties of the other party.

There are also many cases where the losing party has assets but at the same time it also have many other judgments to be enforced, the secured bank debts are due but such party loses the ability to pay. The winning party eventually wins but they can achieve nothing, just keeping the verdict and waiting.

If the losing party is a foreign individual or legal entity, the winning party shall facing with many difficulties stemming from the enforcement of judgments in foreign countries. Meanwhile, the winning party must retain legal services overseas, but the costs for this are not trivial at all.

Although the above problems are “post-litigation” issues, the party intending to initiate the legal proceedings needs to consider carefully, in order not to lament in grievousness: “If I had known about this, I would not have conducted the proceedings!”

Counterclaim is the right of the defendants so they often utilize it, hence this might cause lots of difficulties to the plaintiffs.

Before taking the legal action, the party deciding to conduct the proceedings needs to consider carefully the contents of the contract, the performance of the contract, review the information, talk to the other party to assess whether it is capable of counter claim or not, if any, what the specific issues are, whether or not the counterclaim will cause the plaintiff not be able to request any part of the material benefit, or assuming that there are some benefits that can be requested, whether or not they are worthy of what the plaintiff has spent.

It is necessary to note the expenses incurred while participating in the proceedings, in addition to legal costs or arbitration costs. Once decided to initiate a lawsuit, the plaintiff has accepted the costs related to litigation, but accepted at which rate is another story.

It is known that a law suit is often prolonged,costly, especially with sums of money if counted separately they are trivial, but in combination they are not trivial at all.For example,travel and accommodation costs of the representatives of the petitioner, the more severe is the over seas trips if the dispute settlement bodies is a foreign arbitration centre; costs of translation, legalization and notarization for relating documents; costs of collecting evidence; assessment and valuation costs; costs of petition for the application of preliminary injunctive relief; costs for interpreter;costs for lawyer; communication costs, etc.If the costs for the legal proceedings are notes timated, the money collected when winning in the proceedings are not sufficient for off setting the paid costs.

In foreign countries, the outlook of society in general on the dispute referring to the court or arbitration bodies is quite normal. However, in Vietnam, when mention the litigation, people are still afraid. So sometimes the petitioner is judged as too “aggressive” or “not thinking thoroughly”, etc.

Therefore, it is necessary to carefully consider several factors before deciding to initiate any legal action, such as mutual relations and benefits, adverse effects if there occurs the loss of customers, suppliers, etc.