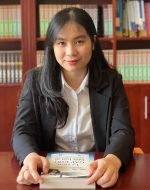 Le Thi Minh Thu graduated from the Ho Chi Minh University of Law majoring in International Law (2016-2020) and participated in the Legal English course. During her University tenor, Minh Thu had a chance to practice her legal skill and experience in A Chau Accounting Company Limited and S&B Law as a legal intern. Minh Thu was involved in various aspects of business law such as legal content drafting, preparing and submitting the legal document in forms of tax, business establishment, legal document translating, legal researching, ….

Besides, Minh Thu also worked as a legal assistance in Me Kong Consultant Trading Construction Join Stock Company where Minh Thu had chance to work with the Court or competent authorities as well as improve her skills in litigation.

After that, Minh Thu has joined Phuoc & Partners as an Intern since August 2020. Through her three months’ internship term, Minh Thu has demonstrated her legal knowledge and skill in each assigned tasks which have contributed efficiently in Phuoc & Partners’ team and has frequently been recognized for good achievement. Therefore, Minh Thu has gained a promotion to become an official Paralegal of Phuoc & Partner since November 2020.