How is a live stream of attack against others and backbiting over social networks prosecuted? 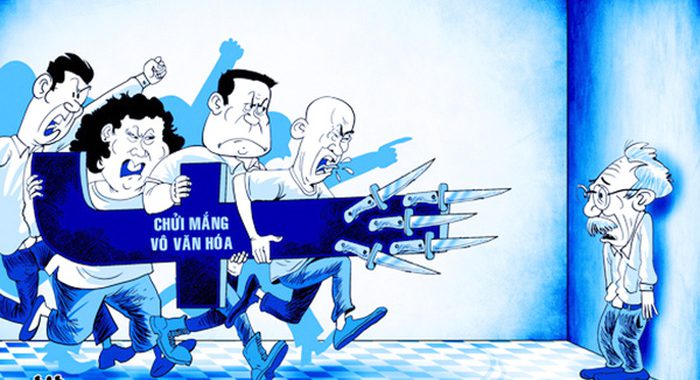 The proverb says that a word once spoken is past recalling to teach people to have to choose what they say very carefully, especially when they have a disagreement or a conflict with other people. Before the appearance of the Internet, when someone has a conflict with others, they will choose conflict resolution by directly saying words in attacking, disparaging, insulting, reviling to their adversaries or backbiting to discredit or humiliate their adversaries. Nowadays, through the modern technology platform and the Internet, the aforesaid conflict has been resolved through posts on social networks such as posts on Facebook or Zalo, or the live stream which is being used to defame others or even accuse someone of committing an offence. The conflict resolution through online forms features a large scale and unlimited access and comment, and a publicly broad spread of others’ stories and defects.

Live-streaming to transmit good content is always encouraged in the context of the widespread outbreak of the Covid-19 pandemic and the occurrence of the Governmental decision on social distancing. However, since the live stream features the subject of a transmitter of the content and it is difficult for competent State authorities to govern and control shared information via the live stream, so the bad content may be shared widely and commonly through such form.

Recently, social networks were broken because person A has consecutively live-streamed to publicly disclose information and facts related to person B, thus the action attracted a large number of followers. After the above information was shared, the cyber citizen was engrossed in a fierce debate to answer their curiosity whether the information is true or just fake, and person B was criticized on a huge of social networks, and then the competent State management agencies have also involved. Particularly, on 28 May 2021, the Ministry of Information and Communication issued its Official Letter No. 1800/BTTTT-PTTH&TTĐT about increasing management and process of fake information on social networks related to the live stream and other activities of posting information which is false to offend the honour and dignity of others.

People often say that the Internet in general – and social networks in particular – are a virtual society in miniature, but in fact, the impact of this type on society is real, including the real damage that its victims do suffer as well as the real responsibility that the perpetrator must take. Whether the live stream of attack against others and backbiting over social networks must face justice or not, and if so, what liability is held, is a question in which a lot of “netizens” are interested.

The live stream, which can be roughly translated as a live broadcast, is now known as the real-time transmission of images, sound, and voice over the Internet, which can be shared with many others at the same time and can be commented on or shared with many others by viewers. Currently, legislation has not provided a separate legal corridor for the live stream over social networks but provides only general provisions in industries, professions, and fields such as telecommunications, information technology, cybersecurity, journalism, culture, e-commerce. The live stream of attack against others and backbiting over social networks can be therefore viewed from a basic legal perspective as attacking and defaming others by producing and transmitting, storing, and exchanging information in the form of sound, voice, images, letters over the Internet.

How does the State guard honour, dignity, and prestige of an individual?

Furthermore, if a person makes an attack against others and backbiting over social networks by using supporting tools such as personal images, private life information, personal secrets, family secrets or letters, telephones, telegrams, electronic databases, or other forms of private information exchange that the victim keeps safe and confidential, these actions are considered a violation of legal regulations on personal private information protection, including the basic law as Constitution of Vietnam 2013 (Article 21), Civil Code 2015 (Article 34 and Article 38) and major laws on information and telecommunication such as the Law on Information Technology 2006 (Article 72), the Law on Telecommunications 2009 (Article 6.3 and Article 16).

However, legal terms such as “insult”, “honour”, “dignity”, “prestige” are currently not defined or explained in detail in any legal document. That the identification of an act is subject to an insult to the honour, dignity, and prestige of a person depends on the State authority and the Court based on the personal real-life experiences and knowledge of the official. In the light of the reference to some criminal judgments on crimes of humiliation and slander published on websites of the publication of court’s judgments, it seems that the judicial authorities do not intend to explain or define these terms, and only take into account the objective acts performed, the intention of the performer, the claims and damages of the victim and the infringed subject. Therefore, the State authorities are often confused in determining the violation, degree of the violation as well as the damages suffered by a victim when the above authority accepts the dispute.

The measure to request competent State authorities to handle a perpetrator

Firstly, in the civil field, any individual whose honour, dignity, and prestige are infringed has the right to request a competent Court to protect his or her legitimate rights and interests under civil law. Therefore, when someone else live-streams attack and slander on social networks, the abused person can request the Court to disprove any piece of information of attack and slander and at the same time request as well the Court to force the person who gave such information to apologise, make public corrections and pay compensation for damages[3]. When the infringed person requests the Court to protect his or her lawful civil rights, he or she has the right to request the competent Court for judicial expertise in the field of information and communication or the Court may actively carry out the solicitation of assessment to determine the damage. The conclusion of judicial expertise will be important for the infringed person to determine the infringement action and the actual damage.

Secondly, in the administrative field, anyone who live-streams attacks and slanders others over social networks in the case of using a website in the way that “Providing false information, distorting, slandering or humiliating information on the honour of organisations, the honour, dignity, prestige of individuals” may be subject to an administrative fine of between VND10,000,000 and VND15,000,000, additionally sanctioned in the form of confiscating the exhibits and instrumentalities used for committing the violation, and be forced to dismiss such bad information.

Thirdly, in the criminal field, the criminal code refers to acts that seriously offends the dignity and honour of others and may constitute a crime as follows:

How an individual protects its honour, dignity, and prestige

The proverb says that “After death, a tiger’s skin remains, a man leaves only his name”. In society, reputation is a “province” with its importance not only at present but also in many next generations. Therefore, the prevention and elimination of attacking and defaming another person on a social network are particularly important and necessary to protect the honour, dignity, and prestige of one’s individual as well as the civilisation in behaviour on social networks. Thus whenever a person posts any information on social network platforms, such person needs to be calm, to select appropriate content and words to speak or write so as not to abuse the right to freedom of expression indiscriminately leading to possible violations of the law and sanctions.

Further to any individual attacked and slandered by others on social networks, although the law has not specifically provided the measures for such individual to protect itself its rights against infringing acts of the honour and prestige from live stream activities, except for some specialised fields such as intellectual property, the law only provides general principles for such individual to defend itself its rights, for example, an individual will himself or herself asks the infringer to stop the infringement, to apologise, to publicly rectify, and to compensate for damages. It should also be noted that personally responding to a perpetrator by measures known commonly on social networks such as live-streaming attacks back the perpetrator, hiring teams of media agents to “make media rescue campaign of media” or “to handle a crisis”, etc. should be conducted very carefully with words, sentences in response to the perpetrator to avoid turning themselves into an infringer.

Moreover, when an individual discovers that he or she is attacked and defamed on social networks, he or she should immediately report it to the professional cybersecurity force so that it can assess, handle, prevent such information from spread and dissemination, and dismiss it. The professional cybersecurity force of the Ministry of Public Security or the specialised division of the Provincial Police Security or the Ministry or provincial Department of Information and Communications will be the authorised force which the victim can reach out to report and request to handle infringing information. If the victim makes the above measures without positive results, he or she may also initiate a lawsuit to request competent authorities to protect his or her lawful rights and interests as the above analysis.

In a conclusion, live-streaming attacks against others and backbiting on social networks can be considered an infringement of the law, of human inviolable rights, and can be subject to civil and administrative liability or even crime as the above analysis. When reporting acts of serious offence against their honour and dignity to the State authority, the offended person should also pay attention to the crime of slander arising from that the offended person fabricates information of crime and denounces it to the State authorities to avoid the case that the offended person makes an incorrect report, and requests the State authorities to harshly handle the perpetrator with many criminal penalties due to his or her lack of calmness or finding of law. This can affect the victim, and he or she can be prosecuted for slander. The appropriate solution is to report facts and events together with related proofs and documents to the professional cybersecurity force for them to investigate, take measures of cybersecurity protection, to perform accusation, investigation, prosecution, and trial of perpetrator according to the provisions of the Criminal Procedure Code or handle administrative violations against the perpetrator. From the results handled by this specialised force, the violated person can initiate a lawsuit to request the rejection of untrue information, correction, public apology, compensation for damages.