Some carelessness in unilateral termination of labour contract 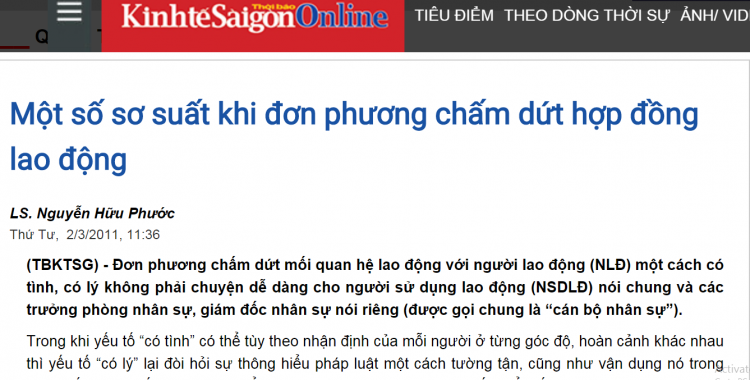 The unilateral termination of the labour relationship with the employee conformable to reason and sentiment is not easy at all for the employer in general and the personnel managers and personnel directors in particular (jointly called “personnel officers”). While the factor of “conformable to sentiment” may change subject to the consideration of each person in different points of view and situations, the factor of “conformable to reason” requires the thorough understanding of laws, and the accurate application of that understanding in reality is actually an “art” that cannot be performed by everybody. The following are some common cases of carelessness that personnel officers often contract while executing the unilateral termination of labour contract with the employee.

Among the typical cases that the employer may use as legal reason to unilaterally terminate a labour contract, there are some cases actually difficult to demonstrate. They are ones that the employers are easy to contract carelessness.

For the case – the change of structure or technology. The most common carelessness of the personnel officers is that they often do not perform the obligated procedure of re-training the employee into the new job prior to the procedure of laying the employee off. Besides, the next carelessness is that not every change of structure or technology may be applied because it will only be applied to partly or wholly change into advanced machine, equipment or process with higher labour capacity, or to the change of product or composition of product leading to using less labour, or to the change of framework of organization (if there is the mergence or dissolution of some departments of the enterprise).

For the case – the enterprise is merged, unified, divided, separated, transferred of ownership, management right or right of asset use of the enterprise, the terms “divided, separated, merged, unified” must be understood in compliance with the definition prescribed in the Law on Enterprise of Vietnam on “divided, separated, merged, unified”. The main carelessness of personnel officers is that they thought that the re-arrangement of management right over subsidiary companies in Vietnam among the companies in the same group or the mergence or unification of departments or divisions in the same company may be applied in this case, so that they wrongly apply this case to unilaterally terminate the labour contract.

For the case – the employee is dismissed as a form of discipline. Common mistake of personnel officers is that they base only on the Labour Regulations which has been registered at local Labour, War Invalids and Social Welfare Department to dismiss the employee. In case the labour contract does not state clearly the value of property has been stolen, embezzled or lost due to the disclosure of technology or business secret or the damages to property or interest of the enterprise caused by other actions, there is not the basis for application of this item to unilaterally terminate the labour contract.

The carelessness of not inviting the Executive Committee of the Trade Union to participate or give opinion in any step of the procedure so required by the laws will make the preparation of the employer useless.

Procedure observation is one among the important parts in the legal unilateral termination of labour contract. Let’s take the case of the procedure of employee dismissal as a typical example for the fact that the employer shall observe seriously these procedures, otherwise he will lose his case when dispute arises and settled by the court.

The first common carelessness is that the personnel officers often forget that the prescription for dealing with breaching of labour discipline is only 3 months from the date of occurrence or discovery of the breach, and 6 months for the breaches relating finance, property and disclosure of technology or business secret of the enterprise. This leads to the situation that the dismissal is applied when the prescription expires, and the possibility for the employer to lose his case is very strong.

The second common carelessness is that the personnel officer advises the employer to dismiss the employee during the time he/she in sick leave, in convalescence or off work with approval of the employer, or waiting for the investigation of the relevant authority regarding the breach, or the female employee is pregnant, in maternity leave, breeding an under-twelve-month old child, or male employee breeding an under-twelve-month old child.

The practice that is conformable to sentiment is one thing, and the practice conformable to reason is also very important, and if it is not performed careful, it will likely cause useless dispute and both parties will lose time, money and effort to pursue the lawsuit at the court. The prior consultancy of lawyers specializing in labour is necessary for the employer to understand clearly about the order and procedure in order to unilaterally terminate the labour contract legally, and it is the job that owners of enterprises should do. If we think that it is impossible to unilaterally terminate the labour contract, we may consider the negotiation with the employee to terminate the labour contract ahead of schedule.