How foreign investors in vietnam transfer their profit to other countries 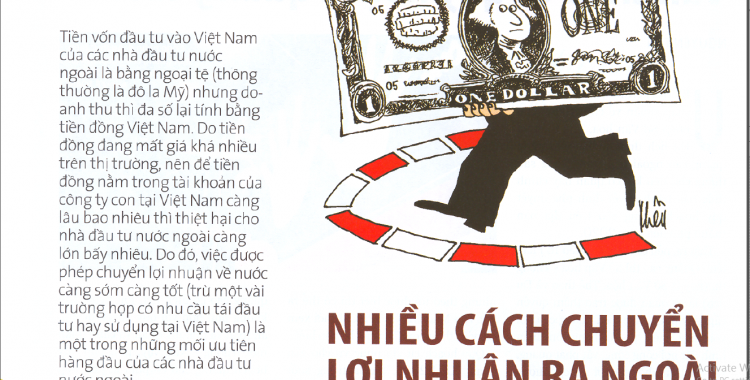 The article titled: “How foreign investors in Vietnam transfer their profit to other countries” from Lawyer Nguyen Huu Phuoc, is published on Sai Gon economic times, dated 20 January 2011.

Foreign investment in Vietnam is denominated in foreign currency, mainly the U.S. dollar, but returns are often in the dong, which is depreciating quite sharply. Consequently, keeping the dong-denominated returns for too long proves extremely costly. This has prompted foreign investors to try to transfer profit to their countries of origin as soon as possible, except when these investors want to reinvest or use their earnings in Vietnam.

Circular 124/2004/TT-BTC (Circular 124 for short), dated December 23, 2004, and promulgated by the Ministry of Finance, provided guidelines on the transfer of foreign-invested enterprises’ profit. According to this circular, foreign-invested enterprises could transfer their annual profit, or part of it, to the countries of origin once if (i) the process took place after the fiscal year ends, (ii) their financial reports had been audited and (iii) these companies had fulfilled their tax obligations.

However, this circular has been replaced by Circular 186/2010/TT-BTC (Circular 186) since January 2, 2011. Notably, Circular 186 no longer allows foreign-invested enterprises to temporarily transfer profit to their countries of origin every three or six months. In addition, this circular does not allow profit transfer if enterprises reap profit in the current year but still run an accumulative loss (after loss transfer, in line with corporate income tax laws, has taken place).

Circular 186 helps reduce pressure on the greenback and indirectly ease strains on the dong-dollar exchange rate. However, it may force foreign-invested enterprises to pull out all the stops to transfer profit to their countries of origin as soon as possible instead of waiting until audited financial reports have been submitted and tax obligations fulfilled. What strategies do these businesses adopt?

A parent company can impose copyright charges (related to brand use) on its subsidiaries in Vietnam for up to 10 years. These charges are not considered as profit transfer and, as a result, are not subject to the aforementioned restrictions.
Under prevailing regulations, the tax imposed on copyright fees is 10%. In line with agreements on the avoidance of double taxation that Vietnam has signed with nearly 60 countries, this tax rate can equal 5%, 7.5%, 10% or 15%. Given that Vietnam’s current corporate income tax rate is 25%, foreign investors have been able to save 10-20% of their net profit by adopting this strategy instead of paying dividends.

Some foreign investors may consider lending to their subsidiaries and, taking into account corporate income tax, impose a suitable interest rate.

Under existing laws in Vietnam, enterprises must register medium- and long-term loans with the State Bank of Vietnam (the procedure is fairly simple) but not short-term loans (aimed at quenching demand for working capital that falls within the parameters stipulated in the investment certificate). The interest imposed is subject to a 10% tax and, in accordance with agreements on the avoidance of double taxation, should equal 10% or 15%. Again, this pales in comparison with the current corporate income tax in Vietnam (25%), helping foreign-invested firms save 10-15% of their net profits.

Foreign investors can offer subsidiaries some services (such as management or technology consultancy) and collect fees. The service provision agreement does not have to be registered with Vietnam’s authorities. Better still, the transfer of service charges is subject to less cumbersome paperwork than copyright fee transfer.

Under current regulations, the taxes levied on service charges are corporate income tax (5% of the contract value) and value-added tax (5% of the contract value). The value-added tax imposed pertains to the subsidiary’s input and does not constitute a cost. Considering that the corporate income tax rate in Vietnam stands at 25% at present, foreign investors can save 20% of their net profit, which is significant.

When a parent company and its subsidiary clinch a contract, under which some products and services are sold to the latter at terms (including those related to prices and payment time) that are favorable to the former, transfer pricing helps the parent company receive more payment at a quicker pace. This approach is legal if the transfer price is deemed appropriate.

Despite Vietnam’s regulations on combating transfer pricing, local tax law enforcers still have a dismal grasp of these laws and, to some extent, encounter difficulty tackling transfer pricing within a group.
Thus seen, Circular 186 may, in theory, help address the lack of foreign currency in the short run by limiting the company’s profit transfer. However, in the medium and long terms, foreign investors will try their utmost to make use of other channels and, in so doing, indirectly transfer profit to their countries of origin. This, in turn, can bite into Vietnam’s tax revenue and spell trouble for the State budget.